As I sit here staring at the screen, the soft snores of my brothers napping can be heard. That’s right people, I Whiskers gave up my nap. Why? Well, a book of course. There are few things in life that will ever postpone my treasured naps. While I love books, as you may have guessed, most don’t interfere with very important self-care time. This one, happily, did.

Many of you may remember when my author decided to try to become a fish. Well, a mermaid really. If you don’t know what I’m talking about, you can read about it here . Since then, our search for everything oceanic and mermaid has been long and dry. In case you didn’t guess, we’re trying to research for a story idea. The idea is barely formed and like three or so books away, so it might be a while before it gets to you readers.

It’s been tough to find a book that appealed to us. Do you like mermaids? If you do, you don’t have to look any further.

Emory Gayle is an indie author like my author Catherine. She also happens to live in our city, too!

Water is Emory’s debut book, and it is an amazing one. My author and I abandoned our lives, pulled into Emory’s story, characters, and writing. When we emerged, the world had changed. The snow was falling, hushing the world and our heartbeats slowed their excited rhythms back to normal.

Water is about Cora Reed, an eighteen-year-old Yorkton, Saskatchewan, Canada resident who is terrified of the water and for good reason. She’s faced tragedy. I won’t spoil what tragedy for you, though. After she graduates high school, she has a clear direction in life. She’s going to university. That is, until her mother’s plans for her and her younger sister Bree change all of that.

Bree and Cora are to work at Camp Crystal in the picturesque Sturgis, Saskatchewan area. The catch, the camp is near a clear, deep lake. Worse, the Camp swim instructor, Darrien Locke, is all sorts of trouble.

Darrien knows, though, because he was sent to watch over her and bring her home to her long-lost father under the sea. When he begins to fall for Cora, his job becomes more complicated. Lying to her and hiding the truth eat at him and threaten their feelings for each other. Not to mention, the constant onslaught of Sirens trying to harm Cora don’t help.

Water is the first book in the series and it is all sorts of fun! So look no further for that great mermaid read, it’s here.

I give it four cat heads of approval. It’s only draw back was, alas, no cats.

And now, it’s time for me to catch up on my naps. Happy reading! 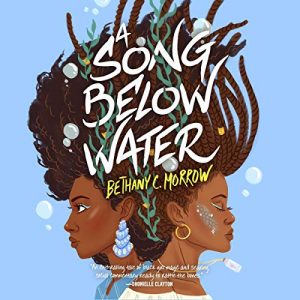 Book Review: A Song Below Water by Bethany C. Morrow

Whiskers of the Nine Realms, or Whiskers for short, is the feline connoisseur of books and companion to author Catherine Milos. She reviews books, talks with authors and their pets, and shares all aspects of author pet life.